And I mean essential.

If you’re spending significant time in Paris, you need to know these cheeses. Yes, they are that essential. No, I am not being overdramatic.

If the fact that this cheese is described as triple cream doesn’t convince you to try it, I’m not sure what will. Mostly produced in Burgundy and usually only aged for a couple weeks, this cheese is soft and creamy for sure. Made fresh, it’s like cream cheese. Aged longer, it’s firmer and smaller, yet magically more creamy! Don’t ask the fat percentage of Brillat-Savarin. Just enjoy!

Another cheese named after its birthplace, camembert is similar to brie in that it is soft, delicious, and has an edible rind. Camembert has its differences, such as the way it was traditionally prepared in smaller batches compared to brie and that generally, it has a stronger taste and smell. But, the most important difference is that it is creamier when put to heat. Once melted, camembert turns into the perfect consistency for dipping literally anything that will get it from the plate to your mouth fastest.

This french cheese comes in a round in a cute spruce box. Traditionally containing 45-50% milk fat, there is no question as to why it is so delicious and so difficult not to eat the entire round at once. Regardless of who you talk to, you’ll be told to pop that thing in the oven, buy a baguette, and dip. You’re welcome. 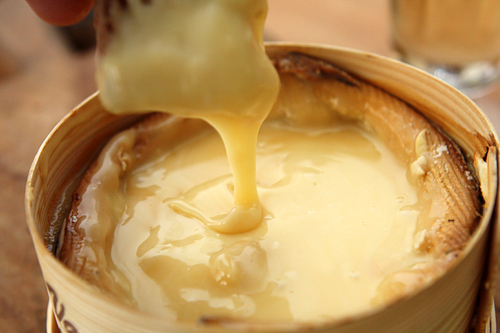 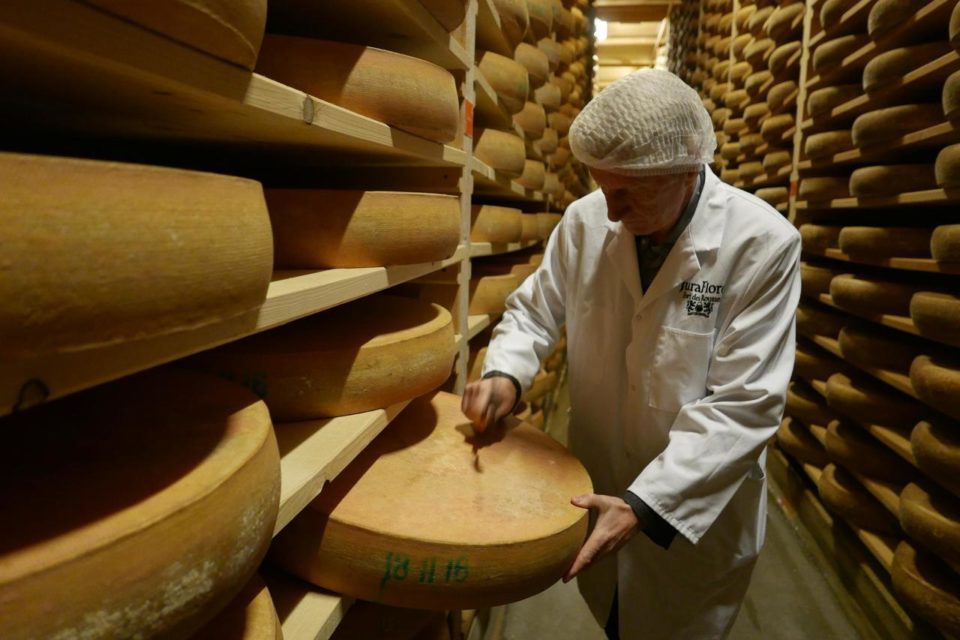 This harder French cheese is mild and a touch sweet making it approachable for any picky person who claims they “don’t like eating mold”. Don’t misunderstand, comte is aged for quite some time, usually 8 to 12 months, you just may not have to think about it quite as much as you would with a cheese that has a blue/gray line down the middle. Use comte for anything; grilled cheese, cheese souffle, or a quick snack.

This style of cheese dish is a Swiss traditional that the French are all too happy to practice. Raclette rounds are held near a fire, grill, heater, or whatever creative method Swiss cow herders or Amazon have come up with over the past few centuries since its birth. Once the cheese starts melting, it’s scraped off onto your plate of potatoes and meat and accompanied by itty bitty pickles and hot tea or white wine. If it sounds too good to be true, then you’re probably doing it right.

Tell your health conscious self to cool it! This type of cheese, made in the French Alps and parts of Switzerland, has a relatively lower fat content because it’s made from the milk that is left over after the cream is used for other dairy products (note how I said relatively lower fat content: wink, wink). Tomme is traditionally used in a dish called aligot. Mashed potatoes blended with cheese is a meal, right?

This one is for the cheese lovers. The lovers of cheese that don’t judge a cheese on something as trivial as whether or not there is mold growing from it. That’s right, it’s blue cheese. You either love it or hate it, what else can you say?

An unaged, soft cheese that many will love, chèvre frais is often used in every way that cheese is usually used. A few quick suggestions would be to use it on bread or toast with pesto, crumble it over a salad or eggs, or just warm it up and use it as a dip. Bon appétit mes amies!

Usually sold in a 14 oz block, Pont-l’Eveque is another soft cheese that is easy to love, and melt. It was originally made in Normandy and though it has gone by several names over the many years that it has been produced and eaten, it has remained one of the most popular cheeses in France.

A subspecies of blue cheese or Roquefort, Bleu de Auvergne has the unmistakable mold running through it. Specifically, Antoine Roussel is credited with discovering that the mold created a good tasting cheese and studying the methods that he could use to create it consistently. Kind of a wierdo, right? But thank him nonetheless! Bleu de Auvergne is one of the less extreme blue cheeses making it a good starting point for someone who is skeptical about the idea.

This cheese is pretty crazy. Resembling a cantaloupe, its huge, round, and orange in the center. Louis the XIV needed to create a patriotic cheese to substitute a foreign cheese, et voila. Colored with annatto (a condiment made from the seeds of an achiote tree), it varies in taste based on the aging process. A young mimolette will resemble parmesan while an old mimolette takes on a very hard texture and is said to resemble the taste of hazelnut.

Fun fact: The rind of the cheese takes on its color from the cheese mites that are intentionally used to produce the correct flavor. The reason you may know nothing about this cheese is because the US banned it from distribution because it exceeded the FDA’s acceptable standard of six cheese mites per cubic inch. The more you know, am I right? 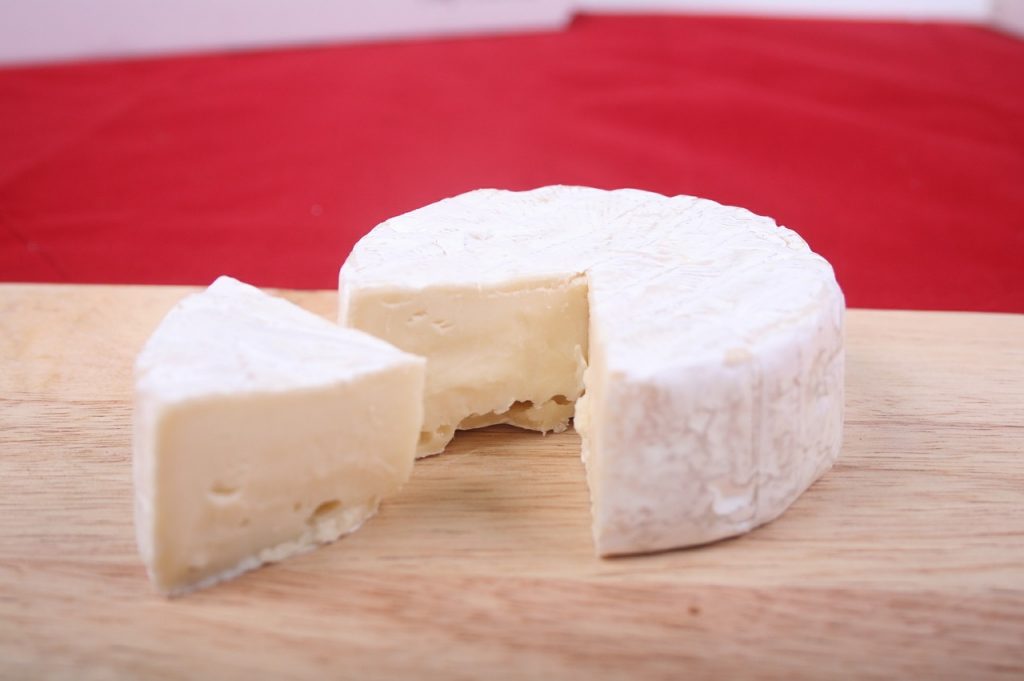 This cheese, like a lot of French things, is named after the region that it was originally produced. Brie is usually bought in a round: that is, if you’ve ever had it before and know that you’ll demolish a pathetic triangular slice in one sitting. It’s soft and so delicious that you can also eat the rind: don’t be scared.

Let’s talk about the (minor) differences between Brie de Melun and Brie de Meaux. The name fully depends on which area of the Brie region the cheese is made and therefore, how it was made. Brie de Meaux is softer and slightly larger. Brie de Melun is a little smaller, saltier, and more firm. Whichever you get your hands on, you’ll enjoy eating them almost as much as you will enjoy telling your friends your cool new cheese facts.

Translated, the name of this cheese means, “to pinch a cow’s udder again”. Apparently, during the 14th century in the southeastern region of France, cheese farmers were taxed based on how much milk their cows produced. So these clever farmers wouldn’t fully milk their cows until after the measurement was taken and use the extra rich milk for their own cheeses. Thus, Reblochon was born! Soft in the center with an edible rind on the outside, it is banned from distribution to the US because the milk is unpasteurized. So grab a taste when you can! 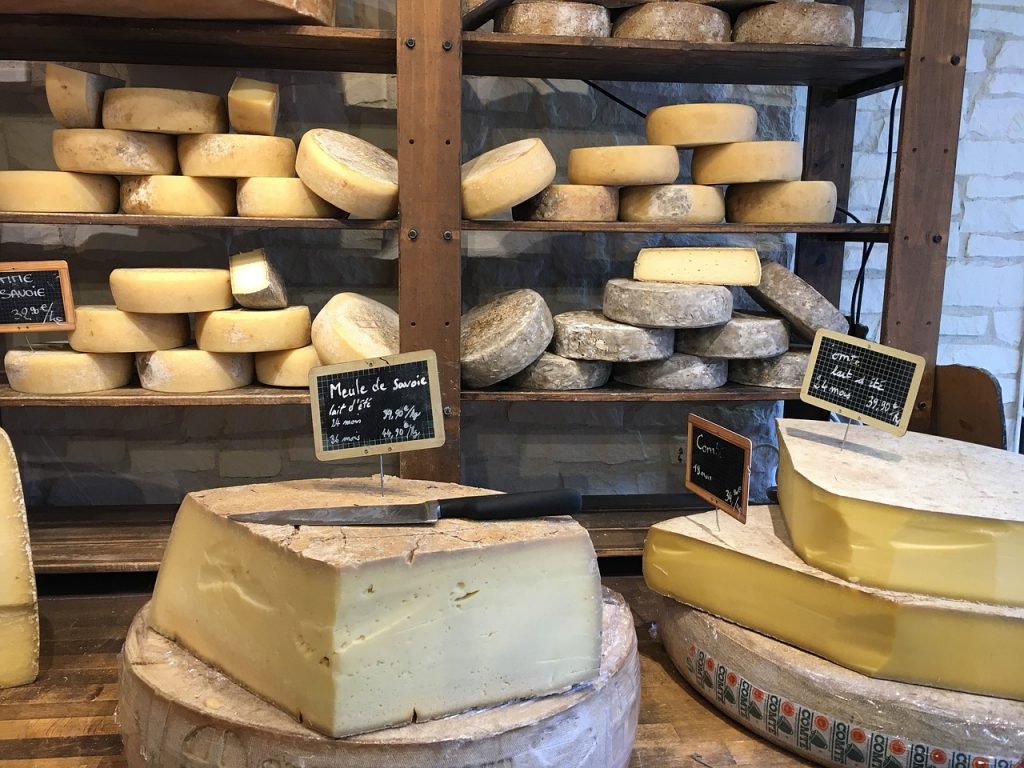 Classic goat cheese in the center with a moldy rind, this cheese stands out. Produced in the Centre-Val de Loire region of France, it’s covered in charcoal in order to obtain the perfect rind during its relatively short aging process; ten day to a month. I know it sounds a little scary, but don’t you dare knock it until you’ve tried it.

Similar to Selles sur cher, this goat’s milk-based cheese is less intimidating due to the lack of mold on the rind. Instead, this soft cheese is traditionally wrapped in chestnut leaves before tied and distributed. Try it and discover why it’s been made and enjoyed for centuries.

Phew! Take a breather! Now you know everything you need to know to go to the local fromagerie and make an informed decision. Not to mention how impressive you will sound at the next fondue party. De rien!