If you’re an art snob, the Louvre is heaven on earth. But from art connoisseur to delighted tourist, it’s easy to miss some of the best paintings the museum has to offer if your one goal is to stand behind a mass of people to catch a glimpse of the Mona Lisa (which by the way is so small a man once stole it simply by putting it under his coat… might I suggest you bring binoculars?).

So instead of wasting your time in a crowd similar to the front row of a Spice Girls reunion concert, there are 300 other rooms with 35,000 pieces of art awaiting your arrival.

3. The Reuniting Of The Louvre And The Tuileries By Napoleon III

You have to look up for this painting by Charles-Raphaël Maréchal, as it is on the ceiling of the large drawing room of Napoleon III’s apartment. This space is a true transport back in time and oozes opulence; it is also generally less trafficked by tourists, so you can enjoy the stunning architecture and all the gold, glitter, and glam in peace. If you decide to stay in his apartment for a few hours, I wouldn’t blame you.

There’s nothing quite like a bunch of nude women taking a bath, and this painting by Jean-Auguste-Dominique Ingres depicts it all as he explores erotiscm in his old age (he was like 82 when he painted it). Plus, it isn’t your run-of-the-mill rectangular canvas, but rather a circle which in itself is neat. And if you’re interested in viewing more nude women, Gabrielle d’Estrées and One of Her Sisters is a painting that, at a quick glance, makes me laugh. Some people assume it announces the pregnancy of her sister and suggests the warmth of sisterly intimacy, but all I see is a woman pinching her sister’s nipple. Which is cool, but I won’t be doing that to my sister any time soon.

This 1830 painting by Eugène Delacroix has been the inspiration for many, including the creation of the Statue of Liberty, Les Misérables, and even Coldplay’s Viva La Vida album cover. I mean, I’m certainly inspired by a strong woman leading men to victory, and so was modern France, as it takes much of its identity from the female figure now coined ‘Marianne.’

If you want to be blown away by the sheer size of a painting, this little number by Italian Paolo Veronese stands at 6.77 meters high (that’s just over 22 feet for the Americans in the room) and 9.94 meters wide (32.5 feet). It depicts the biblical story when Jesus turns water into wine (a talent I would kill to have). There is so much detail to each human figure that you could spend a good hour appreciating every inch of this oil painting.

Not technically a painting, this marble Hellenistic sculpture of the Greek Goddess Nike is well regarded as one of the most appreciated pieces of art in the museum (and the world!), and much more satisfying to stare at than the Mona Lisa. The sculpture was erected in the second century, and is one of the very few sculptures from that era to be an original rather than a Roman copy (except the poor girl had to get her right wing replaced, so besides that minor cosmetic surgery she’s OG).

Where to find it? Denon Wing, Ground Floor, Staircase; Room 703 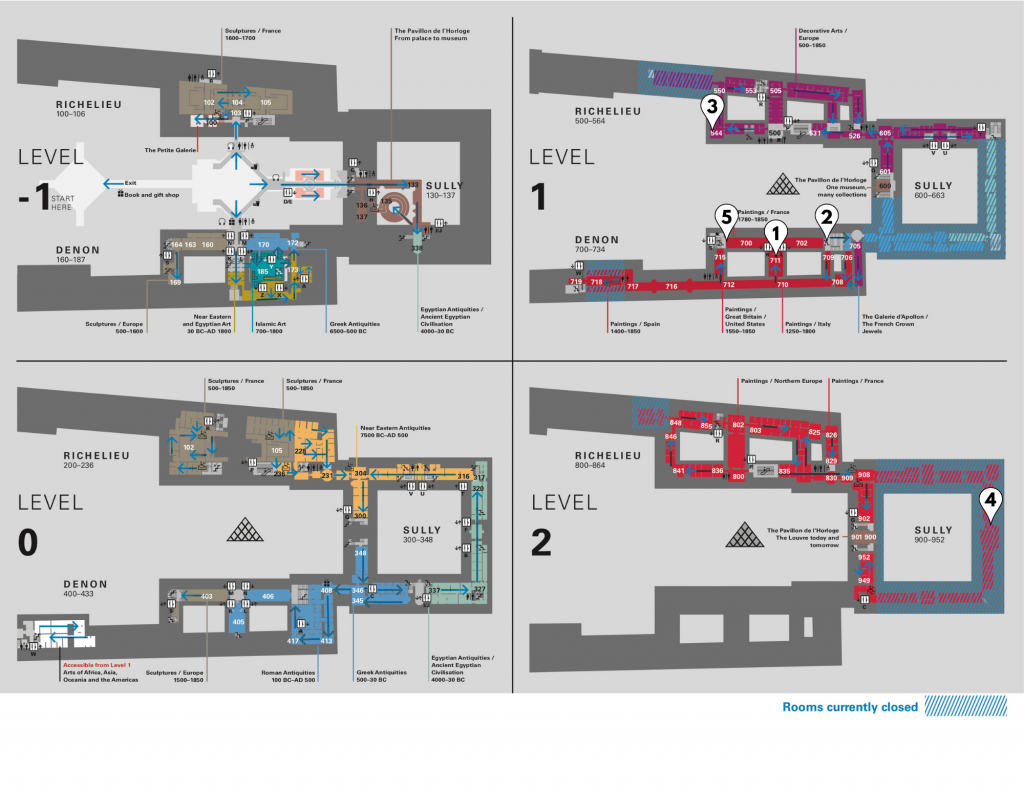